SCB Steelers’ Quick Hitters: The “Football in Your Underpants” Edition

The National Football League Combine is now totally underway in Indianapolis where top college prospects are being poked, prodded, measured and evaluated as if they were aliens from outer space. I simply call the whole event “Football in Your Underpants” because the stuff they make these poor guys squeeze into now for on-field work is downright embarrassing. More on what the Steelers are up to in Indy below.

In case you missed the SCB Podcast last evening it’s right here for your listening enjoyment. We discussed the tagging of Le’Veon Bell and his future in terms of a long-term deal… Antonio Brown’s contract and why it doesn’t mean what many Steelers’ fans think… Draft prospects from Pitt, James Conner and Nathan Peterman… and more.

We are hearing that the Steelers and Lawrence Timmons have been in contact again over a new deal. My guess is that the two sides are still a couple of million apart.

The Steelers placed a low-round restricted tender on offensive tackle Chris Hubbard. They own his rights for $1.8 million but he can negotiate with other teams and the Steelers can match. As solid as Hubbard was as the “extra tackle” last season, the Steelers really need to have that job manned by a tight end. Having a receiving threat there is crucial for obvious reasons.

Tweet of the Day… Shout out to the amazing @SportsMel who wished Big Ben Happy Birthday yesterday. If you like sweets, Mel is your gal!

So far at the Combine the Steelers have met (or will meet) with the following players: Wayne Gallman, RB, Clemson… D’Onta Foreman, RB, Texas… Michael Roberts, TE, Toledo. Obviously there will be more to come.

It’s been public knowledge for quite some time but Le’Veon Bell is mentoring Stanford RB Christian McCaffrey. Not sure what ‘mentoring’ means in this case but let’s hope it’s all for the best.

Good stuff from the “Professor” John Clayton of ESPN as he chatted with steelers.com’s Missi Matthews. Only thing I took exception with was his feeling that they take a cornerback much deeper in this draft. I’m not totally convinced of that. 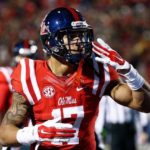