SCB Steelers’ Quick Hitters: The “Rooks Are in Action” Edition

Today is the first day of the Steelers’ Rookie Mini-Camp. This is where the drafted rookies, undrafted free agent rookies, a few first year guys and plenty of ‘tryout guys’ will be put through the paces by the Steelers’ Coaching Staff. While it’s easy to view the guys brought in for a tryout as nothing more than ‘camp bodies’ you must keep in mind that this is where the Steelers have found guys like Will Johnson and Roosevelt Nix. What did they have in common? Both played different positions in college before settling on fullback in the pros.

The latest edition The Steel City Blitz Podcast presented by 26shirts.com/Pittsburgh is available for your listening enjoyment. We spent the bulk of our time discussing the secondary which has all three of us very concerned. We touched on the rookie mini-camp as well as a few other items. Give it a listen!! If you’re curious, these were our drinks of choice last night during the show.

Tweet of the Day… I speak for many when I say “We can’t wait!”

Obviously a lot can change between now and the beginning of the 2017 season but when you compare the rookie class of this season to that of the 2016 season there is a very glaring difference. I do not see the same type of need to get these rookies heavily involved from the get-go and that’s vastly different from what we saw last year. Artie Burns, Sean Davis and Javon Hargrave were pressed into action early either by want or need. As we sit here on May 12th, I don’t sense that same type of situation. That doesn’t mean by the end of the season we won’t see T.J. Watt or Cam Sutton getting significant snaps. It just means the overwhelming need for them to fire right out of the blocks isn’t there.

If you missed Steelers’ Rookie James Conner on ESPN’s ‘Mike and Mike’ yesterday you can find the podcast here.

Bold prediction last night from Cnic on the Podcast…. He says Pitt Tight End Scott Orndoff will make the roster. You heard it here first kids! 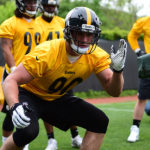