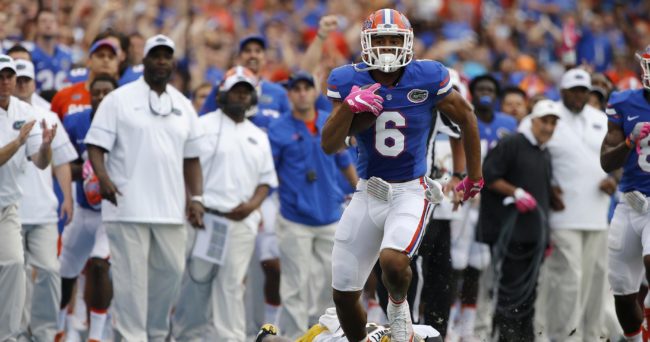 It’s no secret the Pittsburgh Steelers have needs at cornerback. The question is, what type of cornerback are they seeking? Most believe the Steelers will look for someone who can play more ‘man-to-man’ coverage than guys they’ve had before on the boundary. If that’s the case, is Florida’s Quincy Wilson a possibility?

What’s to Like: Have to like Wilson’s size right off the bat… Uses his big frame well to knock receivers off routes… I like his aggressiveness in tackling despite inconsistencies… Pretty good on taking blockers where he wants to go rather than the other way around… Hustles down-field even when play goes away from him… Reads things very well even in play-action… Consistently shuts down crossing routes; forces QB to deadly accurate.

What’s Concerning: I counted six missed tackles vs Alabama… Tends to rely too much on shoulder blocks for tackles; not consistent in wrapping up… A little stiff in the hips… Will struggle with quicker receivers who get behind him… Not overly athletic… Straight-line speed is a major concern… Can be a little cocky as evidenced by his ‘guarantee’ vs Tennessee. His Gators lost.

The Verdict: Wilson will likely be drafted in the late first round but I’m more apt to see him coming off the board in the second. His physicality is something that goes a long way with NFL scouts and coaches. While physical and aggressive, he has to do a more consistent job of tackling. He’s almost always in position, but he must do better. I have no doubt the Steelers will like him. He has the mindset they want on the outside but his lack of athleticism is a concern. If he’s allowed to be aggressive and get his hands on guys at the line of scrimmage he can be a very effective NFL corner.