Plenty of Blame to Go Around Following Steelers’ Loss to ‘Bolts

I’m pretty sure I’m just coming out of coma or just saw a crazy episode of ‘The Twilight Zone’ because there’s no way I just witnessed the Pittsburgh Steelers get destroyed by the 4-8 San Diego Chargers right? I’m guessing you probably feel the same way too and you’re left searching for answers as I assume the men in the Steelers’ locker room are as well.

The one guy that deserves little blame is Ben Roethlisberger. I wrote earlier this week that I would take no excuses from him this week in regards to whatever performance he gave simply because I knew he’d be rusty and he was early in the game and he’s made no excuses. His teammates did absolutely nothing to help him out however until the final outcome was well in hand. 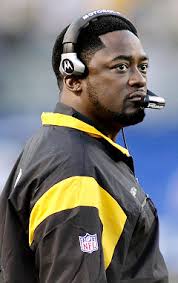 Mike Tomlin however, will get no such reprieve nor will Todd Haley. I hear the argument all the time that NFL players are professionals and they shouldn’t need a coach to get them focused for a game, they should be able to do it themselves. Maybe they should, but who’s job is it ultimately to make sure that happens? It’s the head coach and this team was not ready to play today.

Todd Haley’s gameplan was a disaster from the get-go. The San Diego defensive front seven completely dominated the Steelers’ offensive line in every way, shape and form from the running game to the passing game. Haley had no answer and could not make the proper adjustments to keep Roethlisberger from having to run for his life like it was 2011 all over again.

What has suddenly happened to these running backs? Guys that once hit the line of scrimmage with force and aggressiveness now lack both. Isaac Redman’s attempt on an early third down play and then later on a failed fourth down attempt were horrible. He was dancing before he got to the line! Jonathan Dwyer decided when the team was down 34-10 that he would finally start running the ball hard and lasted two plays because he was out of gas.

The ‘Young Money Crew’ once again proved they were late with their payments by doing absolutely nothing through the first three quarters. Don’t be ‘wowed’ by the numbers, especially by Mike Wallace because until his touchdown catch late in the third quarter he was once again a non-factor. Same goes for Antonio Brown and Emmanuel Sanders as well.

Have to give some credit to the defense for keeping the team in the game as long as they did, but they were eventually going to run out of gas and that happened on the Chargers’ opening drive of the second half.

Still, I have to ask, where was the pressure? Dick LeBeau’s blitz packages were slow to develop and hardly revolutionary. The Chargers’ offensive line was in a worse way than our own yet they stymied the Steelers’ rush all day. Think the absence of Ike Taylor didn’t matter? Think again. With little or no pressure, Cortez Allen and especially Curtis Brown were torched at will on third down by something called a ‘Michael Spurlock’ who converted five of them.

Philip Rivers was far from good on the day but he didn’t need to be as long as he didn’t turn it over which he did not. The Steelers gave him the 10-15 yard out routes all day and he carved up the Steelers like a Christmas ham.

This was supposed to be a game that the Steelers would surely win. They were playing against a ‘dead man walking’ in Norv Turner and certainly the Chargers weren’t going to come all this way and give a damn were they? They did in fact give a huge damn which is far more than I can say for the Steelers who looked like they’d rather be home playing ‘Call of Duty’ on their PlayStation’s.

It really was a microcosm of the season if you think about it. Losses to lesser teams like Oakland, Tennessee and Cleveland have become the norm. Special teams’ gaffes and penalties the same. Lack of emotion and lack of execution once again putting this team behind the eight-ball before they even have a fighting chance.

Do not celebrate the fact that the Ravens and Bengals also lost today and that the Steelers’ playoff fate still rests with them. This team is not going anywhere fast without massive changes and I just don’t see those coming over the final three weeks.

Hey Steelers’ Fans, Are You Spoiled and...

Steelers’ Draft Strategy Should Not Change Even...

Growing up in the Pittsburgh area,(I now reside in Ohio at the age of 71) I suffered with the “Rooney’s Looney’s of the 1960s and,now it appears the cycle is repeating itself.Presently this team is devoid of rational,sound coaching,and absolutely horrendous play calling schemes.What a disaster yesterday against another INFERIOR team!!

Thanks for reading and commenting Bud. There is definitely a problem with this year’s version of the Steelers and I’m not sure what it is exactly. I know it’s a combination of things and that comes back to Mike Tomlin.

The comment mike wallace made about the Steelers being spoiled is a sign that he is not a team player and don’t mind losing, he should have been benched for making that statement. play someone who has the mentallity that when on the field we are suppose to win no matter what or who we are playing. The Steelers (some) are to soft, don’t fight for position, down right cry babies, the players forget this is their job and should do their best always.

This is a pathetic coach and as true STEELER fans we should stand up for a change. He is garbage, he won a Super Bowl with Bill Cowhers team and Ken Whittenjunt got screwed out of a job because of the Rooney Rule. Let’s run this mf out of town.