Personnel Moves By Steelers Done With Contracts in Mind 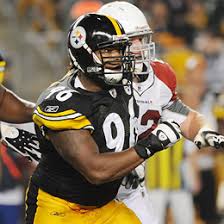 Evander “Ziggy” Hood has started 43 games for the Pittsburgh Steelers since being drafted in 2009. In that time he has amassed over 100 tackles and has 8.5 career sacks.

He is also in the final year of his rookie contract and he will not be starting Sunday’s game in New York.

Ryan Clark has been with the Steelers since 2006 and has been a key member of several top-ranked defenses in the Steel City.

He has ten career interceptions as a Steeler but, according to Head Coach Mike Tomlin, he might see less time starting this week.

There have been discussions about rookie Shamarko Thomas getting more time in the base defense which the Steelers are in less than 50% of the time. William Gay may also see time at safety as well.

With an 0-4 record, the Steelers are by no means completely out of the AFC playoff picture yet the odds are long at best. Should they go 0-5, the season is basically over.

The Steelers are also likely to re-sign safety Will Allen this week. Allen has been with Dallas this season and it is expected that Damon Cromartie-Smith will be the one sent packing to make room for Allen. With Allen coming in, that also suggests changes for the secondary.

I don’t buy for a second that these moves are strictly talent or ‘current level of play’ related. With Hood and Clark entering free agency, this allows the Steelers the ability to limit the snaps and thereby limit the numbers that each player will have.

This will drive down the price that each may ask for in free agency. Personally, I don’t think Clark should be re-signed under any circumstance and his play through four games proves that.

As for Hood, I think there could be a possibility that he returns but with more and more teams going with the 3-4 defense in both the NFL and college ranks ends are in greater supply.

These two moves specifically could very well be about playing ability, but don’t discount the contractual issues for one second.

With Wheaton Out This Week, Does Moye Get a Shot?

Mendenhall Wasn’t the Only One Who Didn’t...