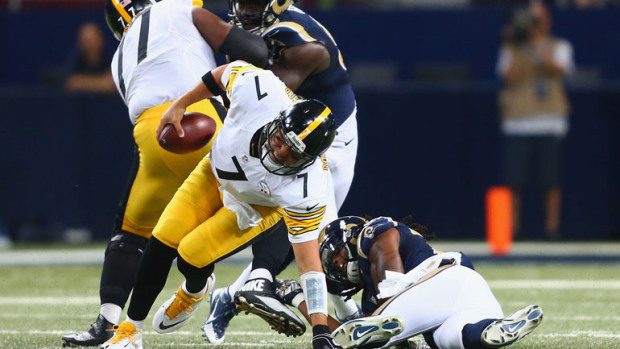 From the moment I saw the Rams’ Mark Barron slam into the knee of Steelers’ quarterback Ben Roethlisberger I’ve thought the same thing. “It wasn’t dirty, but it was deserving of a flag.” Now that I’ve gone through the usual stages of such an injury like anger and acceptance, I still feel the same way and even Roethlisberger himself stated this was how he saw it too.

“A rushing defender is prohibited from forcibly hitting in the knee area or below a passer who has one or both feet on the ground, even if the initial contact is above the knee. It is not a foul if the defender is blocked (or fouled) into the passer and has no opportunity to avoid him.”

To be clear, Barron was not blocked into Roethlisberger. He crawled from a couple of yards away and made the hit. I immediately looked for a flag and saw none which at first I found surprising but then I checked myself. While it sounds rather cliche, I remembered that my quarterback is not named ‘Tom Brady’ or ‘Peyton Manning.’ Two guys who clearly would have gotten the flag thrown.

To make this lack of a flag or fine all the more interesting were the comments from Cam Newton of the Panthers this weekend. Newton claimed that super-buff NFL Referee Ed Hoculi told him that “you aren’t old enough to get that call.” This was in regards to a late hit on the sidelines that should have been flagged.

In my opinion, this is what always made the NFL unique. Star Power really wasn’t a thing like it was in the NBA where superstars would draw fouls simply by being breathed on but that’s not the case anymore and maybe it never was but it sure felt like it to me. Roethlisberger has been down this road before many times and I’m guessing he’s to the point where it’s like water off a duck’s back.

I wish I could approach things that way but I can’t because it brings in subjectivity to a game where it was never intended. A penalty is a penalty regardless of who commits it or has it committed upon them.

That’s what I thought at least… 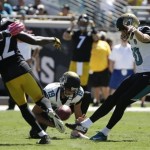 Josh Scobee Needs to Get his Act Together 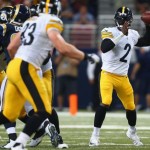 Yeah. Everyone was talking dirty/not dirty this week.

I’ll never fault a guy for just trying to make a play and I don’t think there was anything malicious at all from Barron there. Plenty of commenters on other sites don’t seem to be able to separate dirty hit from illegal hit.

I have no ill will towads Barron, but the guy should’ve been flagged and fined.

I agree with Chris. I take no issue with a guy hustling and trying make a play. I don’t think there was any intent to hurt anyone there. Not dirty, but still a foul.

Note 1 specifically addresses the situation in the Rams game. Barron had fallen and then lunged forward, forcibly hitting Roethlisberger with his shoulder below Roethlisberger’s knee.
It’s black and white. I don’t see where there is anything to interpret. If Barron is not fined, it is a disgrace.