Is Isaiah Buggs The Steelers’ Best Selection In The 2019 NFL Draft? 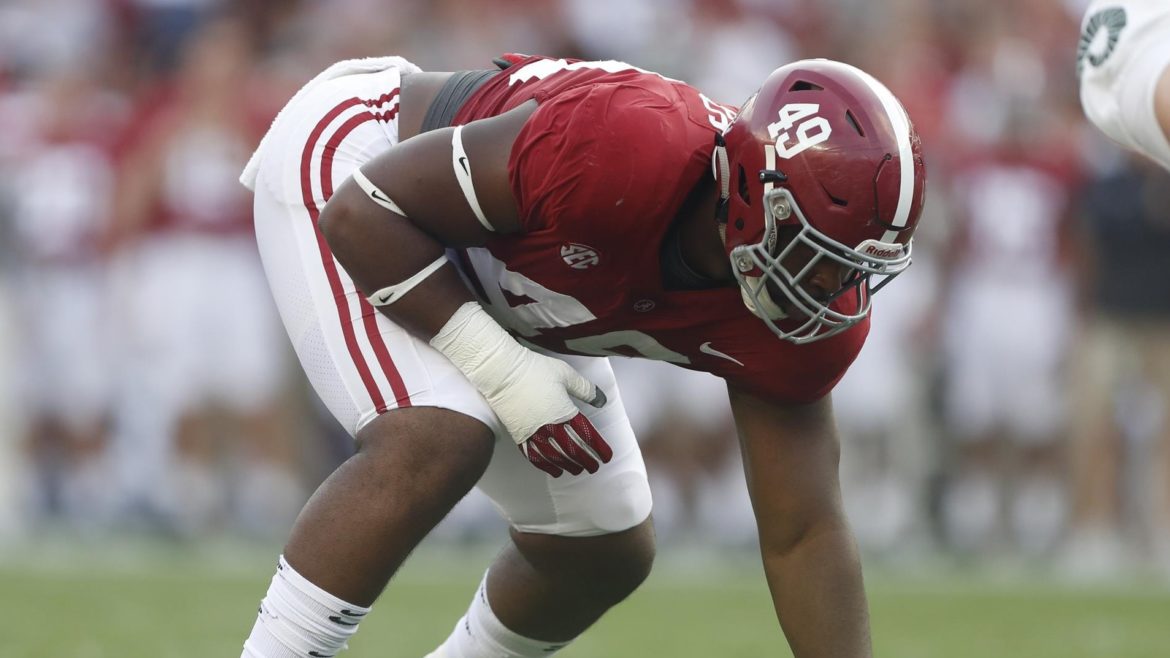 First of all, let me speak on behalf of all of Steeler Nation when I say how proud I am of Kevin Colbert and co. in the 2019 NFL Draft. It took some serious balls to trade up for Devin Bush, a move that we all loved. Unless you don’t understand or appreciate a fantastic prospect, that is. In addition to that decision, the Steelers stuck to their draft philosophy and plucked the players off the board that THEY wanted. Of that, I am super, duper proud.

Of course, no draft can be truly judged until three years down the line, when each and every prospect will have had enough time and opportunity to prove their worth in the ‘Burgh. That said, we must evaluate the selections based upon what we know now, and with that in mind I think our greatest selection may have come in the sixth round, surprisingly.

With the 192nd selection in the 2019 NFL Draft the Pittsburgh Steelers selected 6-3, 306lb DL Isaiah Buggs out of the University of Alabama.

When those words were muttered, I was pleasantly surprised, whilst I whispered “STEAL” subconsciously to myself.

The former Junior College five-star athlete joined Alabama ahead of the 2017 season, but quickly found his feet amongst the NCAA’s best. After a solid 2017 campaign, Buggs presented himself as a domineering force on the defensive line, which solidified his status as a starter in the 2018 season. Speaking of which, he continued his fine form from that of yesteryear, as he tripled his TFL and sack numbers. Despite his continued progression, questions lingered surrounding his athletic capabilities, which I believe ultimately led to his slide in this year’s draft class. But before we touch on those, let’s break down his statistical production.

As evidenced, Buggs’ production where it matters most dramatically increased from 2017 to 2018. Evidently, I would’ve preferred to see an increase in tackle production also, especially given the two extra games, but the leap in the ensuing categories is simply mesmerising. This, is of course down to his conscientious effort to improve as an athlete, something which is evident on tape.

So, how does Buggs test athletically? Are the concerns real?

Buggs’ Combine performance doesn’t reflect that of an elite athlete, unfortunately. His height and frame are relatively solid in comparison with prospects at his position, however, aside from that he is far behind his counterparts. This is best evidenced in the following graphic, which illustrates how he compares athletically to other NFL D-Lineman. 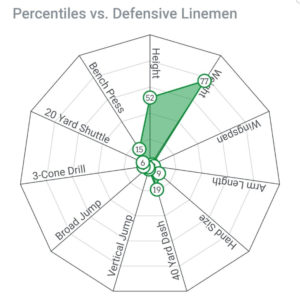 A lot of Buggs’ snaps are spent setting the edge, which he does very well. Aside from that, he is relatively solid in run defense, as he consistently gets his hands inside to establish control. From there, he keeps his head up and is aware of the play being made, as he often jumps off his block to make the tackle.

Another exciting aspect of Buggs’ game is his hand technique. He generally uses that powerful, compact frame to hold his own, and consistently works to get off his block. These techniques, coupled with his size, make for a hard day at the office for opposing offensive lines. He could however, look to add a few more pass rush moves to his arsenal. Although, I don’t feel that’ll be a must-need for him as a Steeler, as I think he’s best utilised inside rather than on the edge.

Whilst he may lack the lateral mobility to run from sideline to sideline, Buggs consistently is on the attack. He shows not an ounce of quit in his play, which speaks volumes to his motor.

Finally, I think Buggs’ versatility is one of his bigger assets. He found success as a defensive end at ‘Bama, which means he could be of use in that area for the Steelers. On the other hand however, I feel his body type and athletic ability should determine that he move inside as aforementioned, where I believe he can truly excel.

Ultimately, the biggest concern surrounding Buggs is his athletic capabilities. This concern was the sole catalyst in his slide to the sixth round of the Draft this year, as some NFL franchises will be concerned about his ability to compete against bigger, more athletic talents at the next level.

Furthermore, Buggs’ consistency could be noted as a concern. This is because statistically he performs well in some games, yet only notches a couple tackles in the next game for example.

Depending on how the Steelers intend on implementing Buggs’ talents onto our roster, he could stand to add a little weight should he be shifted to defensive tackle. At present, he has demonstrated an inept ability to get off blocks against bigger O-Lineman, which is probably best evidenced by his tape against Georgia this season.

Whilst Buggs possesses limitations, he has a proven track record at every level of football he has competed in. Statistically speaking, he has produced big numbers, which have improved year upon year. On top of that, his film depicts that of a well polished defensive prospect, who has mastered his ability.

That said, Buggs’ effectiveness at the next level will be dictated by his athletic prowess, or lack thereof should I say.

So, is he the steal of our Draft haul? Honestly, I think he may be. Sure, he can’t improve on his height or length, but with hard work he can quite easily improve on his Combine performance. Moreover, I’m a firm believer in not taking the Combine performance as an overhanging measuring stick for a prospect because time and time again we have seen players out play their dimensions.

I, for one, am looking forward to witnessing Buggs’ progression this year. Are you?