Inside ‘Backer Situation Not Crystal Clear for Steelers 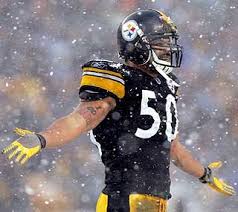 The one constant for the Pittsburgh Steelers’ defense in recent years has been Lawrence Timmons at one of the inside linebacking positions.

Timmons is usually the ‘mack’ linebacker in Dick LeBeau’s 3-4 system which means he does a great deal of the scrapping and attacking from sideline to sideline.

The position opposite him is the ‘buck’ linebacker where Larry Foote entered the 2013 season as the starter.

By the end of the opening game against Tennessee, Foote was lost for the season with a biceps injury.

Rookie Vince Williams saw the most action this season following Foote’s injury and I think the jury is very much still out on the former Florida State Seminole. Because the Steelers were in a nickel or dime package so often, he was not on the field as often as Timmons.

While Timmons is the constant, his counterpart is the question.

Larry Foote will be 34 years of age by the time the season begins later this summer. While he has designs on returning in 2014 there is no question the Steelers need to get younger and better at that position.

Several mock drafts have the Steelers taking Alabama linebacker C.J. Mosley in the first round of May’s NFL Draft. That selection wouldn’t necessarily mean the end for Foote immediately, but it certainly would in the long-term.

The Real Work Begins Now for the Steelers

Breakout Could Be on Horizon for Wheaton in 2014

What Kind of Changes Were You Expecting...

Contracts, No-Shows and…. Just Another Year at...

With Foote and Williams having starting experience, and Sean Spence being fully recovered…

I think they’ve got enough maybe’s at the position to hold off on the position 1 more year and see if either of the young guys emerge.

If none of them do emerge as an option going forward, I think between the 3 they’ll play well enough to hold it together one year while filling holes at more desperately thin positions.

The Steelers are in this position at every position. I keep beating this drum but it’s true. With all the poor drafting this current roster is very thin on talent. The only place where there wouldn’t be a big drop-off in talent due to injury is the o-line because the starters who are all early draft choices with great pedigree haven’t been that good to this point, so there’s not that much dropping if you ain’t up there in the first place. In would think the three biggest needs on draft day are, CB ,safety, TE. of course everyone has an opinion.