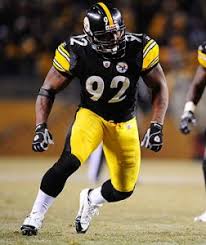 Lost in the ‘Dreary on Lake Erie’ was the performance of linebacker James Harrison who easily played his best game of the season yesterday. With nine tackles, four for loss and a sack, ‘Silverback’ looked much more like the number 92 of old yesterday and if this team is going to turn it around, it couldn’t have come at a better time.

The position opposite him however may be changing before our eyes for the remainder of the season as LaMarr Woodley went out early with an ankle injury he claims will not keep him from playing Sunday at Baltimore. Quite frankly, his replacement Jason Worilds was just as effective if not more so. Worilds totaled four tackles, 2 sacks and had three QB hits. His pressure on Browns’ QB Brandon Weeden was more than I’ve seen from Woodley at any point this season.

The one problem Worilds has at times where Woodley thrives is in run defense. Worilds will often get caught inside rather than set the edge on the perimeter. With that said, why are we not seeing more of Worilds in obvious passing situations? By doing this, Dick LeBeau accomplishes two things; he gets some rest for Woodley who could benefit when he does have to rush the passer and Worilds has proven over the last two seasons now that he can get to the QB as well if not better than Woodley.

As for Harrison, if he continues his play which at times yesterday involved some very big intimidating hits, then this defense could get even better. Not only was Harrison making plays in the backfield, but he was also getting sideline-to-sideline as well as I’ve seen him this season. I have to believe he is as close to 100% as he can be.

Woodley is an excellent defender but injuries seem to be nagging him over the last two seasons and really since his big contract, his pass rushing skills have not improved much. There was a time when the thought of Jason Worilds having to start at OLB would have worried me a ton, but not anymore. Perhaps Worilds’ play will spark some fire in Woodley to get to the passer more often.