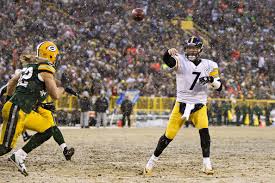 If we look at the greatest QB seasons in NFL history, we’ll find both similar and different names at the top of those lists. This is why determining a quarterback’s ‘best’ season is always difficult.

The discussion has come up in many quarters regarding just where this current season ranks for the Steelers’ Ben Roethlisberger. I’ve heard more than one person say this is his best overall season and I’ve heard others say it might not even be in the top three.

So where do we rank Roethlisberger’s current season? With one game to play, he has 27 touchdown passes and just 12 interceptions. His passer rating sits at 93.7 and his completion percentage is at 64.4% which is about one full percent higher than his career average. He also has 4,082 passing yards which compares closely to his 2009 total of over 4,300 yards.

In his 2007 season, he threw for just 3,154 yards or in other words, about a full thousand yards less than in the current season or in 2009. Does this mean that we should through that year out of consideration? No, because it all depends on what you classify a ‘great’ season as.

I could make the argument that 2011 was his best season for a couple of reasons. First, he had a TD to INT ratio of 21-14, a completion percentage of 63.2% and a passer rating of 90.1. Not his best numbers but…. The team that year finished 12-4 and had to settle for a wild-card because they lost the tie-breaker to 12-4 Baltimore who defeated the Steelers twice that season.

The Steelers would lose to 8-8 Denver and Tim Tebow in overtime in the Wild-Card game.

So why would I consider 2011 one of his best years? While the 40 sacks were one thing, Roethlisberger dealt with leg injuries that really started in week two when he took a shot by a Seattle defender. The bigger blow came in a home win over Cleveland in week 14. He suffered a serious high-ankle sprain and was never the same for the rest of the season.

When you throw in those factors and that the team went 12-4, that’s a pretty damn good season.

The only person that can tell you what Roethlisberger’s best season has been to this point is Ben himself. I am not going to classify this current season as his best because the rocky start is hard to avoid in any discussion. I believe his work in the no-huddle offense is what makes this season a contender though.

He has not only shown the ability to be the ‘cerebral’ quarterback many feel he is not, but he also has helped put guys like Le’Veon Bell and Antonio Brown in positions to achieve great success. If you wanted to tell me that you felt this was his best season I could listen, but I could also listen to arguments for other seasons as well.

It’s easy to point to a QB who leads the NFL in touchdowns and yards and whose team has 12 wins and say, “that’s his best season,” but if you really know and understand football and the quarterback position then you can understand why numbers don’t always tell the whole story. Defining Ben Roethlisberger’s ‘best’ season is similar because we all have different opinions on what creates the term ‘best.’

My guess is that Roethlisberger would say his best season is one that ends with a Super Bowl win.

What I’m Watching Tonight With the Steelers

Ben Roethlisberger Could Make or Break This...

Steelers’ O-Line is Has No Room for...

Three Keys for the Steelers’ Offense in...