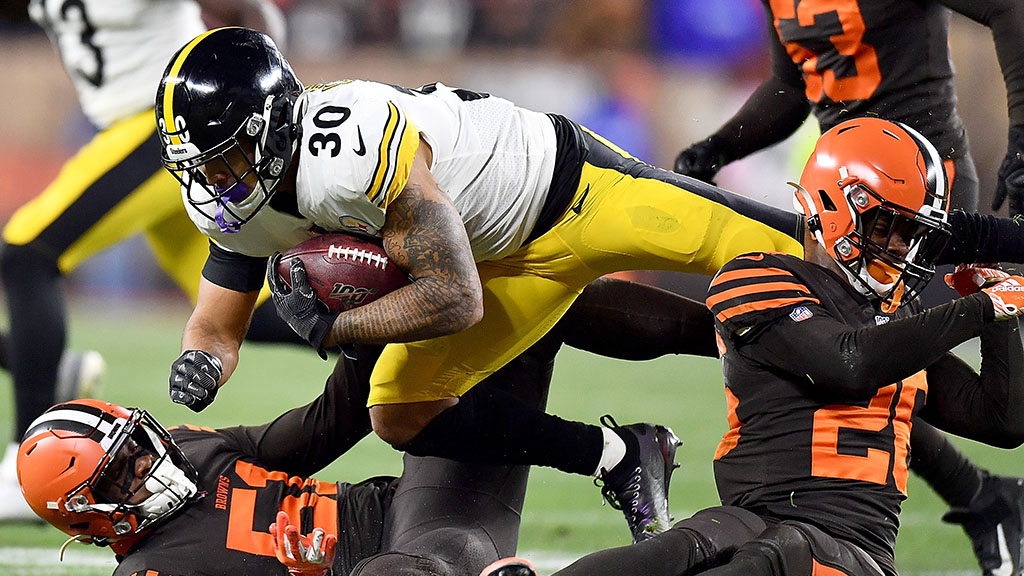 While the free world debates the National Football League’s decision to suspend Myles Garrett for the season and Maurkice Pouncey for three games, the rest of us are left to pick up the pieces of a brutal offensive performance in Cleveland. Offenses led by backup quarterbacks are, by nature, supposed to be much weaker than they would be with the starter. But what is happening goes far beyond just Mason Rudolph.

You don’t throw four interceptions and say “it wasn’t that bad.” Despite receivers running the wrong routes at times, the delivery of the ball still rests on the shoulders of the quarterback and Mason Rudolph struggled mightily last night. Troy Aikman made an excellent point during the telecast about Rudolph getting “heavy legged” at times in the pocket and he’s spot on. Rudolph’s pocket presence is still a work in progress and it often leads to poor fundamentals. Balls will sail, balls will be thrown behind and balls will be thrown into the dirt. That’s where Rudolph is right now in terms of his overall play. It lacks consistency.

Last night was a microcosm of the Steelers’ problems at wide receiver. I think Diontae Johnson will turn into a really nice receiver and the same may be true of James Washington but right now the receivers (and this includes tight ends and backs) are not helping Rudolph out at all. Yes, there are drops but there are also guys running incorrect routes. There are guys not catching the ball with their hands. And there are guys who are just not getting the necessary separation.

The situation got so bad last night that it resulted in Tevin Jones seeing serious playing time despite being added to the roster just hours before the game. The Johnny Holton experiment has run its course in my mind too. Depending upon who is available for the Bengals the Steelers may have to add a receiver from the street.

A source told me this morning that last night a top Steelers’ official made the statement that the team “does not have a starting, NFL-caliber running back.” This is 100% accurate. James Conner is not available enough to be considered a full-time NFL back. Jaylen Samuels is a third down back primarily and Trey Edmunds is fortunate to be on an NFL roster to be very honest. The latter two players struggled in blitz pickup last night significantly.

Lack of true running back talent is one thing, the lack of being able to sustain blocks is another. This offensive line, which contains a number of Pro Bowlers, is not playing well. I tweeted out early in the season that the loss of Mike Munchak was as big as the loss of any player and I took some heat for that. Well, I stand by it today and with a greater body of work to go on I think the loss of Munch has indeed been glaring.

Look no further than the complete inability to gain a yard or two in short yardage. There’s no push. There’s no urgency. I’m not saying these guys aren’t giving effort – they all do – but something is just not clicking right now. And that leads me to….

There are three instances that speak to what I’m talking about in regards to Fichtner’s play-calling. The first is his decision to run a ‘flea-flicker’ last night. In order for this trick play to be successful, some set-up is necessary. In this case, the set-up is being able to run the ball successfully. There’s not a defense in the world that’s going to fall for a flea-flicker when you’ve been totally incapable of running the football. The safeties and linebackers don’t have to come up to stop the run making it easier to cover receivers down-field. This was an egregious mistake by Fichtner that stunk of panic.

The second is actually a two-fer. In consecutive games with his offense backed up to the shadow of their own goal post, Fichtner called play-action or five-step drop passes. This put Rudolph in his own end zone and in both cases he was sacked for safeties. You can do this with a veteran quarterback but not with a guy who already struggles to get the ball out quick enough. This was really poor thinking by Fichtner.

Lastly is his inability to get anything out of the running game in short yardage. This is actually where I can defend him a bit because the lack of high quality backs (see above) and a below par offensive line (see above) are hindering his ability to get those short yards and move the sticks. His infatuation with constantly running tight formations on third and short running plays doesn’t help either.

When you combine poor play-calling, erratic QB play, poor O-line play and the total lack of a consistent running back you have yourself an offense that’s going to rank near the bottom of the NFL and that’s exactly where the Steelers are. Had the events of the final eight seconds not happened can you imagine how much we’d be talking about Rudy’s four picks and the lack of a running game? I guess that’s what I’m here for.

WPIAL 5A & 2A Semifinal Results and Championship Matchups

If the Steelers were to put Ruldolph on the market right now for a 4th round pick there would be no takers, that says everything. The defense is great but they can’t sustain this without some help from the other side of the ball. Right now there isn’t very much difference between this and the TWD. They really need to find a QB soon or it will be the 1980’s and 90’s all over again. Ben has 1 maybe 2 years left of dink and dunk football.