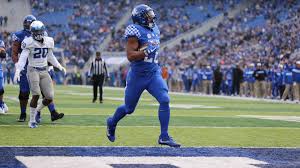 The Pittsburgh Steelers entered the 2019 NFL Draft seeking to fill multiple holes throughout their roster, which included finding a running back to bolster depth at the position in an attempt to help fans forget about the abomination that was Stevan Ridley. Of course, it’s pretty hard to believe that the word ‘abomination’ should be utilised with the name of a third string back, but there you have it.

In what was a rather surprising selection, the Steelers grabbed Benny Snell out of the University of Kentucky 122nd overall. The two big takeaways that I gathered from that selection is that the organization CLEARLY value Snell’s talents. Secondly, due to the fact that they could’ve waited until the later rounds of the Draft to select a third-string back with many talented athletes remaining on the board and arguably greater needs deserving of a refit elsewhere, they evidently plan on making him a large part of the ground game this season.

With that in mind, I took to the task of identifying the key things SteelerNation should know about our newest workhorse in the Steel City. But most importantly, I’m going to attempt to prove why Snell could and should be important for the upcoming season, and for years to come.

– Started 27 of 39 games through three seasons as a Wildcat, including 26 in a row.
– 2018 team captain.
– Three year starter.
– Nickname: “Snell YA Later”.
– According to ukathletics.com, Snell describes himself as a “learner” on the football field.
– From a footballing bloodline. His father played for the..urgh..Baltimore Ravens, whilst his great uncle was a Super Bowl winning RB for the New York Jets back in the 1960’s.
– Majored in pre-media arts studies.

– One of the most appreciated aspects of Snell’s game is his ability to endure contact. He does a great job locating running room and shoots through the gap with all the pace and power of a freight train, which helps to prevent the tackler from bringing him down. This prowess is coupled with unbelievable heart and determination to simply succeed, as evidenced by his fantastic record as a continuous starter despite the hits he’s endured at the collegiate level.

– While I have question marks surrounding his top speed and ability to sustain a quick pace on longer runs, Snell boasts a solid burst upon collecting the football, which provides more than enough leverage to get the first down on shorter yardage plays.

– As a pass catcher, Snell could definitely benefit from NFL coaching. Upon the conclusion of his collegiate career, he only accumulated 29 total receptions which speaks volumes to his ability in that facet of the game, and not in a good way. Oppositely however, when presented with the opportunity to aid his team upfield he has delivered, therefore the foundations have been set, he merely needs to build upon the skills he has already acquired.

– In terms of pass protection, Snell possesses the stature of a running back that any franchise would adore. Furthermore, he has solid technique and a clear desire to help his offense to boot, which produced great results last season.

Conclusive Thoughts Ahead Of The 2019 NFL Campaign

The first thing that worries some Steeler fans out there is Snell’s athletic ability. Obviously, his Combine performance doesn’t bring that ‘wow’ factor that some other prospects behold. Having said that, he boasts a proven track record at the collegiate level, having accomplished and conquered school records in abundance of double figures, which speaks volume to his productivity as a football player.

The important thing to remember about the intangibles of an athletic prospect is the fact that athletic ability can only carry you so far. We’ve seen time and time again that just because prospect A is a better athlete, doesn’t mean they will reach greater heights than prospect B who isn’t quite the same in terms of god given ability, but works his tail off to become better. That being an attribute that Benny himself possesses, whilst us fans LOVE it.

Conclusively, I firmly believe that Benny Snell Jr. should be a key contributor to our offense in 2019. Firstly because he has a more than proven track record as a viciously productive running back for his collegiate side, where he registered 3873 rushing yards and a school record 48 rushing touchdowns in just three years. Moreover, he would be an excellent outlet to help share the load during the NFL’s long old season in order to utilize James Conner at 110% fitness and prevent him from suffering another injury in the latter, most important, part of the campaign.

Whilst I was initially apprehensive over Colbert’s decision to take Snell, or any back for that matter, off the board so early in the Draft, I am genuinely ecstatic at the realization of the Steelers hosting the impeccable talents of Conner, Samuels and Snell. A running back core, which for me, is one of the best in the league.

Benny Snell Jr. Will Be A Key Factor In The 2019 NFL Campaign was last modified: June 5th, 2019 by Greg Forbes
2019 nfl draftBenny SnellKentucky WildcatsPittsburgh Steelersrunning back

SCB Steelers Quick Hitters: The “Tee It Up” Edition