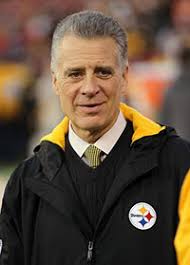 These were ARII’s first comments since the season ended more than a week and a half ago.

Despite the team finishing 8-8 for a second consecutive year and missing the playoffs for a second straight campaign, ARII sees the “arrow pointing up” for his Steelers. It’s hard not to agree considering the team finished 6-2 following a 2-6 start but I do have concerns with some comments.

He was not nearly as critical of the defense as I felt he should have been although he did discuss giving up too any big runs and big plays overall. If ARII can “retire” his offensive coordinator following a 12-4 season in 2011 then why can’t Dick LeBeau be questioned after two 8-8 seasons? It sure sounded to me as if LeBeau was getting a pass.

ARII also said that while it is typical to re-do the contracts of their quarterbacks with two years remaining as is the current case with Ben Roethlisberger that the team may wait until after next year. This is a curious decision to me and I’ll keep my thoughts on it quiet as the offseason develops. Perhaps we’ll get some more clarity over that time. My wheels are definitely spinning though.

I agree with some of what he had to say especially regarding instant replay, expanding the playoffs and Tomlin’s keeping the team together in the second half of the season but I obviously have concerns over Roethlisberger’s potential contract situation and Tomlin’s decision not to take time off the clock in Green Bay. There is no bigger area of improvement needed for Tomlin than clock management in my opinion.

While I personally think it’s great to have owners who don’t need to be in front of a camera after every game, it would be nice to hear from Art Rooney II a little more often. Then again this is why they own the team and I don’t.

No Clear Direction for Steelers’ First Round Pick

Two Changes the Steelers Must Make in...

LeGarrette Blount’s Helmet All the Rage on...

Steelers Are Investing Too Much On Pouncey