The Extremes of Mason Rudolph on Display Monday Night 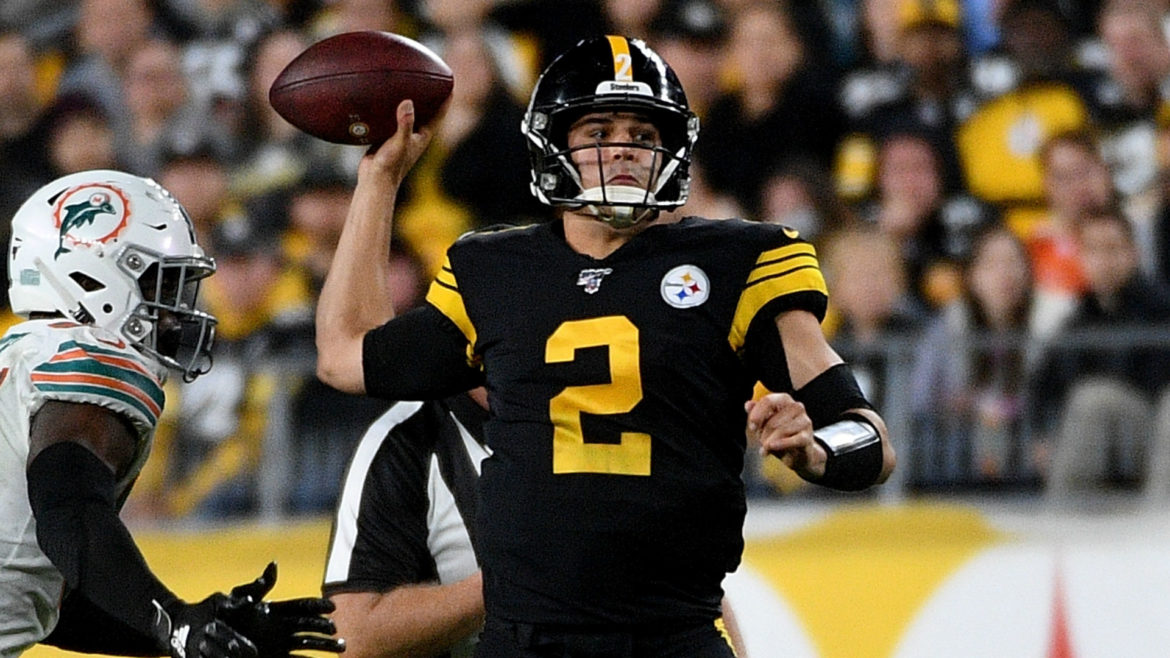 Part of sharing my opinion here, at least as I see it, is being able to admit when I’m wrong. Monday night proved once again why I am not an NFL Head Coach because I admit I was ready for “Duck Season” about halfway through the second quarter of the Pittsburgh Steelers’ eventual victory. Quarterback Mason Rudolph was that bad. I told the guys here at SCB last night  that they had to get Rudolph out of there if even for a series or two. They didn’t and their faith paid off.

Was it nerves? Was he still feeling the lingering effects of the concussion 22 days earlier? Was it something Miami was doing defensively? Frankly it may have been a bit of all of those but regardless, Rudolph was struggling. His decision making was poor as were his fundamentals. Throwing off your back foot is rarely a good idea unless you’re Aaron Rodgers and Rudolph is not him.

Watching the rush is a major no-no for a quarterback and Rudolph found himself doing that a lot in the early going. I don’t care how good you are if you’re looking directly at the pass rush then you can’t be looking downfield and that’s bad. Also bad were his throws. The overall accuracy Rudolph had on crosses and comeback-type routes was not good and was something I worried about when he was drafted. He does not possess the arm strength to force throws. In other words, he has to rely on timing and accuracy and early on he wasn’t close on either.

There’s an old saying about how great quarterbacks often “throw their receivers open.” This means that the QB puts the ball in a place where only his receiver can catch it and most of the time that means leading on crossing routes and being on time with stops or outs or comebacks. Rudolph was on the struggle bus early and often in those regards.

How Did It Turn Around?

The injuries in the Miami secondary were huge – there’s no denying this – but Rudolph also challenged his receivers to make plays and they responded. While one could argue the Steelers went to the ‘fade well’ too often, there was a reason. They had clear mismatches and as ESPN’s Steve Young said, “most quarterbacks can throw fades all day.” Setting those aside for a second, Rudolph also started to shine on other throws. He was getting the ball out quicker which meant only his receiver had an opportunity to catch the ball. He was getting the ball out in front on crossing routes and he looked overall more comfortable in the pocket.

Do not dismiss the importance of the Steelers’ running game though. 29 carries for 158 yards goes a long ways towards keeping a defense on its heels. But Rudolph still had to make throws and he did so more often than not over the final two-thirds of the ball game. Let’s not forget that the Steelers took the lead in the third quarter on a 12-play 97 yard drive that resulted in a touchdown. Rudolph was seven of eight on that drive that culminated with JuJu Smith-Schuster’s terrific touchdown catch. 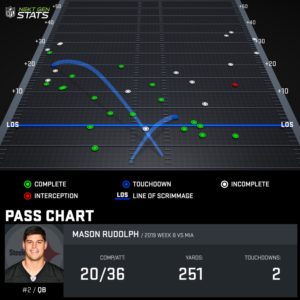 Take a look at the pass chart (above) from last night. Rudolph went from a guy who checked down a ton in recent weeks; In fact it was to the tune of less than six yards per throw. Last night that number jumped to over 14 yards per throw. Was that a product of playing from behind and needing to push the ball or was this by design and what the defense was giving him? In my mind it doesn’t matter because it was working.

Indianapolis will offer a major jump up in competition when they come in next week. There’s not much worse than falling behind 14-0 to Miami but falling behind by that score to the Colts is a different story due to their offense and defense. Another struggle to start the game would be troubling for Rudolph but I don’t see it coming.

I think he showed the type of attitude and intestinal fortitude you want to see in a struggling QB and even if he doesn’t have James Conner next week I don’t see the same type of start for him. Having those types of extremes on a regular basis wouldn’t be good for anyone. I think we’ll see a much more balanced Mason Rudolph next week.