The Anatomy of a Steelers Draft Pick: Power Conference Players 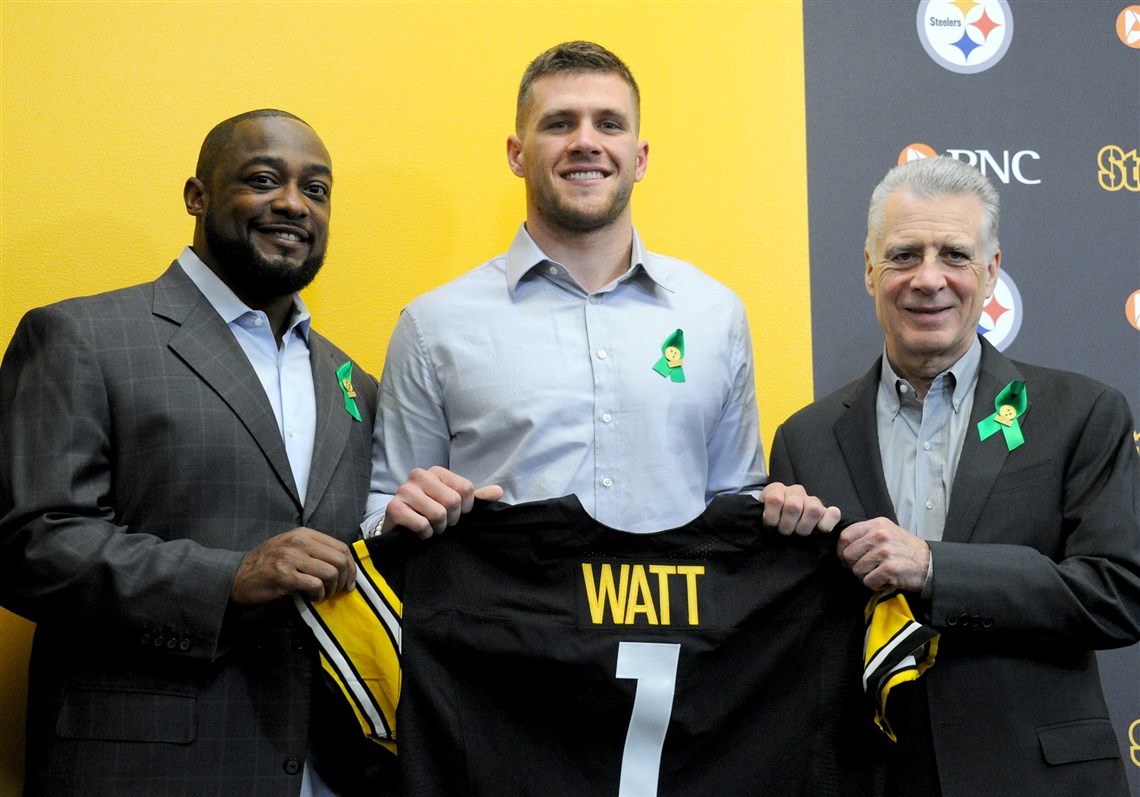 Kevin Colbert has been at the helm of the Steelers personnel decision-making since 2000. After a decade as the Pro Scouting Director for the Detroit Lions, Colbert was hired by the Steelers as Director of Football Operations in 2000 (the team did not have a general manager). In 2010, they gave Colbert the title of General Manager. In both job titles, Colbert has been in charge of drafting operations. This season will be his 20th in charge of the team’s draft. With 19 years of data, there are some conclusive trends that can be gleaned about which types of players Colbert prefers to draft. Over the next few weeks leading up to the Draft we will be looking at the trends that have emerged and Colbert’s drafting tendencies. 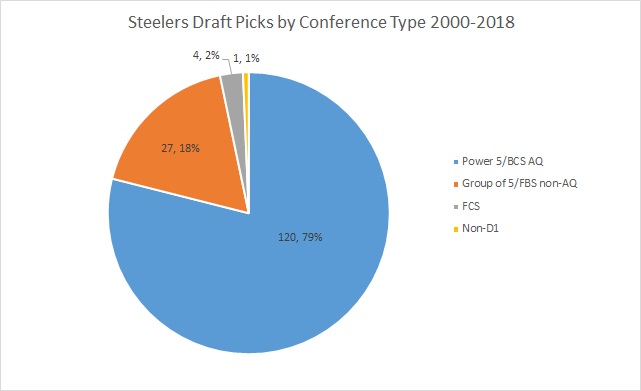 The Steelers have a reputation as a team that loves small-conference players. However, that reputation does not hold up to a statistical analysis. Over the last 19 seasons, only the New Orleans Saints have drafted more players from Power Conference schools. In total, the Steelers have used 120 of their 152 picks since 2000 (79%) on players from Power Conferences.

Where the Steelers fall below the league average is in their selections of FCS and non-Division 1 players. The Steelers have only picked 4 FCS players since 2000 (2.6% of picks), the lowest total in the league. They have only taken 1 player from a non-Division 1 school (Ricardo Colclough in 2004). Only the Redskins, who have not selected any non-D1 players, have picked fewer than the Steelers. 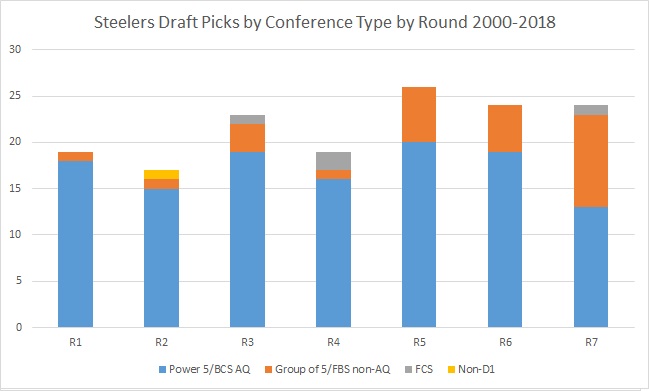 While Colbert has been more willing to invest in non-power conference players in the 3rd round, the 4th round has flipped. Only 3 of the Steelers’ 19 4th rounders have been from non-power schools (Ike Taylor, Willie Colon, Cortez Allen). All three of those selections came between 2003 and 2011. Though Colon couldn’t stay healthy and Allen flamed out with injury, it is noteworthy that all three of these players did get a second contract with the team. On the whole the Steelers have not been good at picking in the 4th round. Ike Taylor and Larry Foote are far and away the best 4th round picks of Colbert’s tenure.

The Steelers have ventured outside the power conferences 6 times in the 5th round and 5 times in the 6th round. While there have been some busts (Omar Jacobs, Joe Burnett, Frank Summers), they have also hit on a number of these selections. The most notable is Antonio Brown who went from a 6th round pick to the best wide receiver in the league. Aside from Brown, Clark Haggans and Chris Kemoeatu also had solid careers coming from Mountain West schools. Seventh round picks are generally a crapshoot. At this point in the draft, the Steelers have essentially disregarded a player’s alma mater. Of their 24 7th round selections, 11 have come from non-power conferences. The most successful 7th rounders (Brett Keisel and Kelvin Beachum) both came from non-power conference schools. 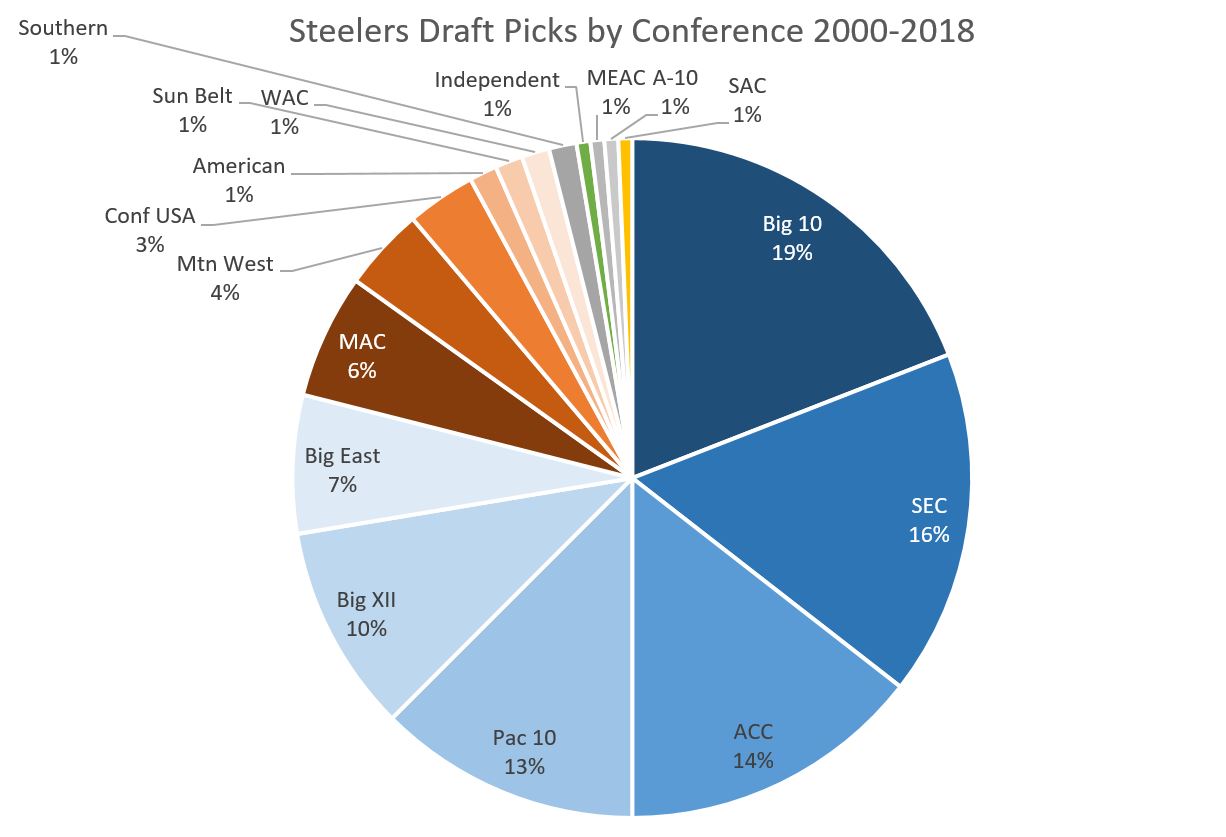 Looking at the 120 players selected from power conferences, the Steelers have tended to favor players with relative geographic proximity. The Big Ten has accounted for 29 draft picks, the most of any conference. Additionally, 6 first round picks and 5 second round picks have come from the Big Ten. Those 29 selections of Big Ten players are the second-most of any team since 2000. Only Indianapolis (33) has drafted more Big Ten players.

Next is the SEC (25 picks) and ACC (22 picks). These two conferences have been about equally favored in the early rounds with 4 first round picks and 3 second round picks coming from each. The Steelers have been slightly above the league average in number of ACC players chosen. The Bills pace the field with 37 ACC players, a full 10 selections ahead of the Vikings. Conversely, despite using 25 picks on SEC players, the Steelers are actually slightly below the league average. The SEC has produced the most drafted players (853) since 2000, nearly 200 more than the Big 10 (657). The Bengals (39) and Seahawks (38) have selected the most SEC players while the Raiders and Chargers (18 each) have picked the fewest.

The “schoolyard defense” conferences of the Pac-12 and Big XII come next. Colbert has selected 19 Pac-12 players and 15 Big XII players, including 2 from each in both the first and second rounds. The Steelers have been right around the league average number of selections for both of these conferences. There may be something to avoiding them, as the hapless Browns lead the pack in Big XII draftees (25) and are second only to the Eagles in Pac-12 selections with 29 (the Eagles have 33).

Finally, even though the Big East had an automatic qualification spot into the BCS and was by that standard a “power” conference, the Steelers did not treat it as such. Only 10 Big East players were chosen from 2000 until the breakup of the conference in 2013 and none were picked in the first or second rounds. The Steelers are actually ahead of the league average for Big East players, but there may be something to avoiding them as once again the Browns (14) led the league in Big East draftees. Interestingly the Steelers have chosen nearly as many MAC players (9) as they have Big East players (10). The Steelers have chosen more players from the MAC than any other team.

Don’t expect the Steelers to take a stab at a non-power conference player in the early rounds. That likely rules out the possibility of a player like Delaware S Nasir Adderley and puts some question marks around Temple CB Rock Ya-Sin. Kevin Colbert did attend Notre Dame’s Pro Day, though as we discussed earlier the Irish could be considered a “power conference” school despite being an independent. Of course, some of these trends have been dictated by how the drafts have fallen. The Steelers were reportedly set to take Houston CB William Jackson (from a non-power conference) in the first round before Cincinnati did and the Steelers opted for Artie Burns (from a power conference). In all likelihood, expect the Steelers to continue the trends of what they know – selecting players from major conferences – in the 2019 Draft.