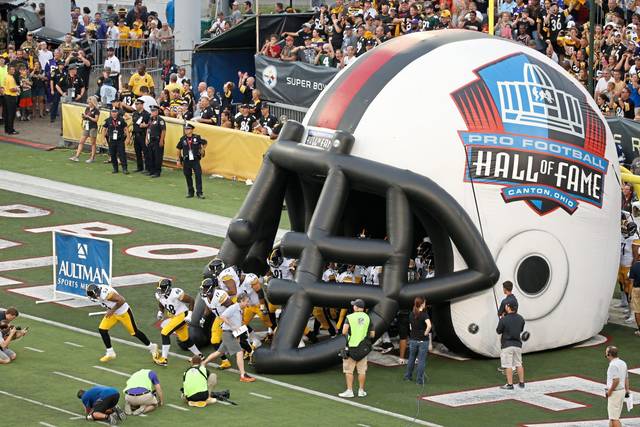 After the long offseason that seemingly dragged on forever, NFL football is finally back. The Steelers had been slated to play the Cowboys in the Hall of Fame game last year, but the COVID pandemic caused the entire 2020 preseason to be cancelled. As it turned out, the Steelers now get to play in the Hall of Fame Game in the weekend where five members of the organization are being enshrined in Canton. Contributor Bill Nunn, head coach Bill Cowher, safeties Donnie Shell and Troy Polamalu, and offensive lineman Alan Faneca will all enter the Hall this weekend as part of the combined induction for the 2020 and 2021 classes. But there is also a football game to be played. Here’s what we’re going to be watching for on Thursday night.

This has been our biggest question mark since last season ended. To be honest, it was a question mark for the later half of last season as well. The line has been completely rebuilt. As we have said on the SCB Podcast, our expectations for this group is that they will get better as the season progresses. We are not expecting this group to come out and dominate from the get-go. But what this game will establish is their base line. This will be the starting point against which future performances of the group are judged.

It is worth noting that some of the projected starting group – Zach Banner, Chuks Okorafor, and Kevin Dotson – have been limited so far in camp due to injuries. Nevertheless, none of the starters are set in stone and any guy on the roster could put together a performance in the preseason that earns him a starting spot. There are going to be some growing pains along the way, but we want to see this group get off to a strong start to build the foundations of a quality line.

Ben Roethlisberger will not be playing in the Hall of Fame Game. In all likelihood, he will only play a few drives in the third preseason game and that will be it until the opener in Buffalo. Mike Tomlin has announced that Mason Rudolph will start the Hall of Fame game, Dwayne Haskins will finish the first half, and Josh Dobbs will finish the second half. While the Steelers generally take a run-heavy approach in preseason games, it will be interesting to see how the three quarterbacks perform.

Rudolph needs to show the ability to read defenses and go through his progressions while making good decisions with the ball. We don’t need to see more of Rudolph checking it down every time his first receiver isn’t college-open. Haskins has a cannon for an arm but needs to show touch on the ball and improved decision-making from his turnover-happy time in Washington. Josh Dobbs has always been better when he can rifle the ball to a target rather than trying to finesse a touch pass. As such, he has struggled in the red zone over time, but he has the best mental processing of the group and is capable of making plays with his feet.

With Mike Hilton’s departure in free agency, the Steelers will need to use the preseason to determine their cornerback rotation. Last year’s 6th round pick Antoine Brooks has gotten the first crack at the position in camp with free agent signee Arthur Maulet also rotating through. Both will see time in the preseason, but the real question will be if James Pierre’s progress as a boundary corner will be enough to push Cam Sutton into the slot in passing situations. Undrafted free agents Mark Gilbert, Shakur Brown, and Stephen Denmark may also get looks in the slot throughout the preseason.

The big one here is the punting battle between 7th round pick and fan-favorite Pressley Harvin III and Jordan Berry, arguably the most derided person by Steelers twitter who is not a backup quarterback. Harvin has a massive leg and is a former Ray Guy Award winner. Berry always punts well when the weather is good, but struggles once the calendar gets into November.

Other than that battle, keep an eye out for which players are making tackles, executing blocks, and generally playing their assignments on special teams. The last few spots on the 53-man roster are nearly always decided by special teams play, and a big play (like a tackle or a big return) can be just as helpful as a bad play (a penalty or attempting to return a kick you should fair catch) can be harmful.

In any preseason game, this is the most important factor. Losing a player that has the potential to be a contributor during the regular season outweighs any good things that could happen in this game. For this reason, most of the Steelers veteran starters will either sit this one out or only play sparingly. Young players who were either signed in free agency or were recent draft picks will likely see significant time as the Steelers try to get them as many reps as possible. Having quality depth on the roster will be even more important this season with the addition of the 17th game in the regular season. The last time the Steelers played in the Hall of Fame Game, they did have a significant injury when kicker Shaun Suisham tore his ACL on the terrible turf (which has since been replaced) in Canton. Hopefully this time around the team is able to make it through the extra preseason contest without any injuries.