Steelers History: When the Ravens Had Nothing to Lose 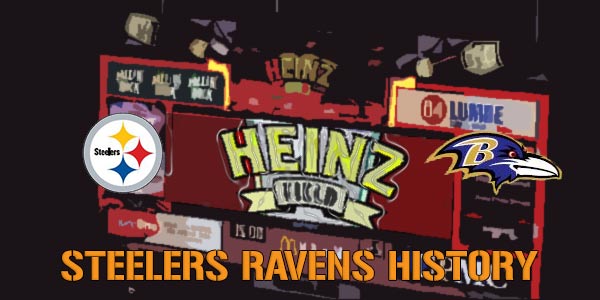 Overall, when the Pittsburgh Steelers and Baltimore Ravens clash in Pittsburgh, the Steelers are 17-11 ahead in what are usually very closely fought games.

For our history look this week, we go back to October 2005 when Cincinnati were top of the AFC North at 6-2 while Pittsburgh were two games back. Division rivals Baltimore came to town for a Monday Night clash.

The Steelers were favored by 11 points against a Ravens team that had won only two games. The Steelers were on a 10-0 MNF winning streak under Bill Cowher. The absence of Ray Lewis and the Ravens record of not scoring 20 points in any of their six games were the reasons the Steelers were heavily favored.

The Steelers has rushed for a total of 818 yards in their first six games and were being criticized for not throwing the ball enough.

Hines Ward and Antwaan Randle El were not complaining. “I think it has a lot to do with winning,” Randle El said. “We feel our time will come, that there will be a time that we have to put the ball up. Teams are not going to let us just keep pounding the ball like that.”

Baltimore’s quarterback Anthony Wright was an undrafted free agent, who had been on the Steelers roster in 1999. Wright bounced around the league before becoming a starter for the Ravens when Kyle Boller was injured. Kordell Stewart was Baltimore’s backup quarterback. 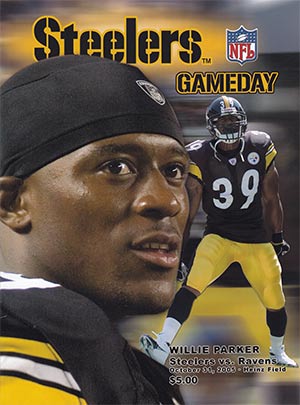 With the Ravens expected to pack the box to stifle the Steelers running game, Pittsburgh took to the air. It proved effective on the Steelers first series after they received the opening kickoff.

Roethlisberger led his team on a drive of 79 yards, taking over eight minutes off the clock, and finishing with Ben’s 4-yard touchdown pass to Heath Miller. The Monday Night crowd in Heinz Field went into celebratory mood in anticipation of the Steelers giving their opponents a thumping.

The buoyant mood quickly changed when Baltimore replied on the next series after Wright found Chester Taylor in the endzone with a touchdown pass of 13 yards to tie the game.

Despite Steelers’ Quincey Morgan returning the ensuing kickoff 59 yards to give Pittsburgh good field position, the drive stalled with a 4th and 7 on the Ravens 34.

Pittsburgh lined up given the impression they were going for it, but a surprise punt from Roethlisberger was downed on the Ravens one-yard line by Cedrick Wilson to back the Ravens up to their goal line.

Baltimore added to their woes with a fumble Pittsburgh recovered to give them a first down on the Ravens’ 12. Stout defending saw the Steelers come away with just three points after Jeff Reed kicked a 42-yard field goal.

Matt Stover replied for the Ravens with a field goal of 22 yards and the teams went into the locker rooms at half time tied 10-10.

After the halftime celebrations when the organization and fans paid tribute to Myron Cope, the Steelers came out for the third quarter in an energetic mood.

An interception from Chris Hope presented the Steelers’ offense with an opportunity that Roethlisberger seized upon. Finding his passing touch again, he threw six consecutive completions with the final one to Heath Miller for an 8-yard touchdown catch.

With both defenses dominating the contest, the Ravens slowly began to edge their way back into the game. In the final period, Matt Stover kicked field goals from 40 and 49 yards before a bizarre mishap by the Steelers special teams gifted the Ravens a window of opportunity.

Pittsburgh’s long-snapper snapped the ball too early. After the ball hit special teams captain Sean Morey in the leg, he picked it up, threw a lateral to punter Chris Gardocki who threw an incomplete pass.

After Pittsburgh’s gaffe, the Ravens took possession at the Steelers 45. Baltimore moved the chains to enable Stover to kick a 47-yard field goal giving them a two-point advantage and their first lead of the game.

With just 3:21 minutes remaining, Coach Cowher turned to Roethlisberger and said, “Hey, this is what it’s all about.” Ben went to Reed and told him, “I’m going to get us down there… you win the game.”

Starting on the 21 and struggling with an ailing right knee from an earlier hit, Roethlisberger completed passes to Randle El and Morgan for 37 yards. “When you complete two passes and get inside the 50, you’re almost in field goal range already,” observed Roethlisberger later.

To take time off the clock, the Steelers used Verron Haynes for a 7-yard gain before Jerome Bettis ran for 16 yards on four carries to move the ball to the Ravens’ 19.

Enter the Monday Night cauldron the flamboyant Jeff Reed. With 4 from 4 when previous games have been on the line, Reed kicked a 37-yard field goal to extend it to five and ignite the Steeler fans into euphoria.

Reed wears his game winning mantle well. “I just want to win,” he acknowledged. “I don’t care if it’s 5 o’clock in the morning or Monday Night Football. It doesn’t matter.”

The Steelers defense smothered the Ravens’ last possession and they triumphed with a 20-19 victory.

We did not play our best football game,” Coach Cowher admitted. “But we won the game. There’s a lot to be said for that.”

Hines Ward agreed saying, “It’s a sign of a good team to win a game like this.”