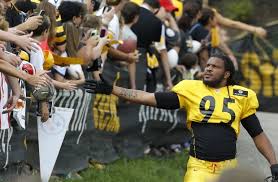 -The Steelers were off yesterday but are back in action and practice is open to the public today at 255pmET. If you’re going, here’s your official guide from steelers.com.

-Here’s Bob Labriola and Missi Matthews on the Steelers’ first day in pads.

-Nice article from Dale Lolley at the Observer-Reporter on Kelvin Beachum.

-The Post-Gazette’s Ron Cook tells us the same thing we said about Maurkice Pouncey two weeks ago. What Michael Sam has to do with this story I’ll never know.

–Cleveland’s Josh Gordon claims secondhand smoke caused him to fail his most recent NFL drug test. Ya sure… and I’m overweight due to secondhand food too.

-During my spot on Trib-Live Radio yesterday with host Daniel Dudley, the topic of Jarvis Jones came up. Dudley echoed the sentiments of those around him at camp and from those I’ve talked to as well that Jones is still struggling. He cannot afford a bad year and neither can GM Kevin Colbert who selected him in the first round in 2013.

-Lots of cool things coming for us at Steel City Blitz. We have a new logo coming which I absolutely love and a website re-design as well. We will keep you posted as those things are unveiled.

Are the Steelers ‘Resting’ Bell? It’s Not a Bad Idea