Good morning Steelers’ fans! We’ve reached the middle of the week again so fight to get over the hump!

The prize of the Steelers’ free agent class finally took part in practice yesterday. Ladarius Green was able to go through all of practice without any issues and will look to do so again today. The Steelers now have three weeks to decide on what to do with him. They can add him to the active roster or they can return him to the PUP/IR designation. I’m taking a very “wait and see” approach with Green. That said, if he can be what the Steelers think he can be, he will be a match-up nightmare for opposing defenses.

No ‘Nail the Number’ this week with the Steelers off. Never fear, it will return with the Ravens’ game.

Good stat from Ben… John Harbaugh is 6-2 all-time following his team’s bye week. Mike Tomlin is 6-3. Both are 1-2 in the last three years.

Ben also has a must-read article on the issues surrounding Mike Tomlin’s record on the road versus lesser opponents. Give it a read because it might change your your views.

Steelers’ QB Ben Roethlisberger would not commit to any timetable for his return yesterday on his radio show but I’ll be surprised if he doesn’t start versus Baltimore.

Make sure you vote in our weekly fan poll….

Tweet of the Day…. I’m going to assume AB isn’t all that banged up since he was on Seth Meyers last night.

Chris Adamski of the Trib reports that the rookie trio of Artie Burns, Sean Davis and Javon Hargrave have only been on the field together for four plays.

If the Steelers are relatively healthy starting next week and by that I mean… Ben is healthy as is Marcus Gilbert, DeAngelo Williams, Cam Heyward and Ryan Shazier, then I see no reason this team can’t six of their final nine games if not more. Glass half full? Maybe, but it’s time to put up or shut up in my opinion. 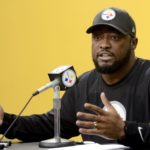