The college football season has finally ended after last night’s marathon game (these games are WAY too long). LSU defeated Clemson to capture the National Championship behind another sterling performance from QB Joe Burrow. This is a guy that will be written a lot about in these pages because it just seems to damn likely that he’s headed to the Cincinnati Bengals. Our division rivals own the number one selection in the Draft and with Andy Dalton a free agent this seems just like an incredible no-brainer for the Bengals to select the Ohio native. I watched about six of Burrow’s games this year and I came away very impressed. It’s one thing for a guy to have a good game in the Playoff or a stretch of good games during the season but Burrow has been consistently awesome all season long. That said, I’ve seen this movie before. Great QB in college has all of the expectations heaped upon him as a top pick in the Draft only to flame out for any number of reasons. Burrow does not strike me as such a guy but there’s something to be said for a guy coming from a culture inside LSU to the culture of the Bengals. Andy Dalton did an admirable job of attempting to make the Bengals more consistent but ultimately failed. Will Burrow be the difference? We will likely find out.

The Calls to the Hall

With Bill Cowher already getting his invitation to the Pro Football Hall of Fame, former players Donnie Shell, Alan Faneca and Troy Polamalu will find out their fate tomorrow. I think we know Polamalu is a shoo-in but Faneca and Shell are more in limbo despite my contention they should not be. Either way, we’ll let you know as soon as it happens. Correction: Only Donnie Shell is eligible for Wednesday. Polamalu and Faneca will be voted on later.

Tweet of the Day… Speaking of Joe Burrow. Here was Vince Williams’ take.

I have to admit it’s pretty weird to look at the 2020 Mock Drafts and not see the Steelers listed in the first round. I don’t see a scenario where the Steelers find their way back into the first round so trying to determine who the Steelers will take in round two is not going to be easy. As far away as we are from the Draft, it’s fair to say there are any number of positions that could be targeted by the Steelers. Running Back, Tight End, Offensive and Defensive Line would be starters for me but there are other spots we can’t rule out either. Get ready folks because it’s going to be another fun ride to the Draft!

Is It Official Yet?

I’ve seen a lot of people using the term “Las Vegas Raiders” and I couldn’t help but wonder… is that official now? I wasn’t sure if we were supposed to wait until the end of the season or was it official when the Raiders’ season officially ended? Either way it’s really weird. Even when they were the Los Angeles Raiders it wasn’t this strange. I do feel for the Oakland folks. They deserved better. 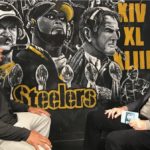