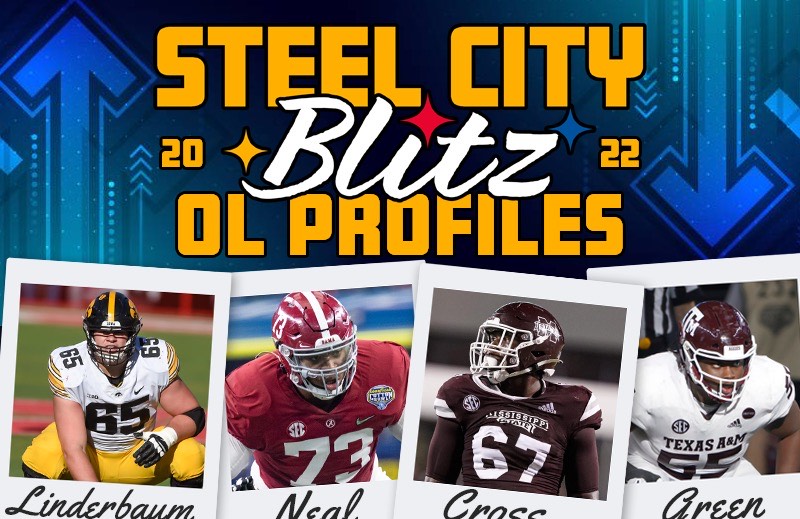 The Pittsburgh Steelers did some free agent work to shore up their interior offensive line in the offseason but does that mean they are out of contention for even more upgrades through the draft? Here’s a look at some our favorite interio O-Line prospects.

What’s to Like: Great athlete… RAS score was well above 9… Provides plenty of pop with his hands in pass protection… Three-year starter… Very durable starting 31 of 32 games… Former tight end…

What’s Concerning: Definitely on the lighter side which bigger, stronger D-Linemen will take advantage of… Short arms are a concern… Doesn’t get to the second level as well as expected…

Our Draft Grade: It will likely take the right fit but I see him gone in the second round, maybe early third. He’s got a serious motor and loves to play the game. A team running a zone based offense would be best for him.

What’s to Like: Does not delay in getting to the second level… Excellent double-teamer who takes very good angles… Plays aggressively in both the run and the pass… Has position flexibility after spending time at tackle… Two-year captain… Finishes blocks with authority…

What’s Concerning: Blitzes and twists seem to give him some issues… Athletic blitzers could give him problems as he doesn’t always react in time… Balance can occasionally be an issue… There are some limitations athletically which could limit the system he plays in.

Our Draft Grade: Johnson is a first rounder. His experience in various offenses has proven he’s a quick study and that should translate at the NFL level.

What’s to Like: Never stops hustling/plays to the whistle… Background as a wrestler is clear in his use of leverage and quickness… Great, quick hands… Explosive hips… Gets to the second level quickly…

What’s Concerning: He’s a little undersized which may limit the type of system he is used in… A little inconsistent with his shotgun snaps as they can be high… Bull rushers who can match his speed will be a major problem

Our Draft Grade: Linderbaum isn’t without some concerns but in a weak center class he’s the top dog and should easily go in the first round. There are teams that will no doubt try to pack weight on him but only if he can retain his speed and athleticism.

What’s to Like: Good pass protector… Has starting experience at both guard spots… Really good pop in his hands…

What’s Concerning: Run blocking is surprisingly average/Needs serious improvement… Seems hesitant getting to the second level… Often late to pick up adjustments… Not sure he has the overall size to be a dominant player

Our Draft Grade: Ingram does a lot of things well but I think his struggles are due to his physical makeup and that’s going to be hard to overcome. I like him as a third rounder.

What’s to Like: Ultimate road grater as a run blocker… Starting experience at both guards and even some tackle… Really good hands… Physical and aggressive from snap to whistle…

What’s Concerning: Pass protection is decent but will need work especially against quicker rushers… Has a bit of tendency to get grabby which will result in holding calls at NFL level… Had some issues against defensive twists in a couple of games…

Our Draft Grade: I’ll be stunned if he isn’t off the board within the top 40. I think he’s a first rounder but if there’s a run on certain skill positions it could force him down boards. As far as I’m concerned he’s plug and play. That doesn’t mean he doesn’t have things to work on because he does, but he’s solid.

What’s to Like: Big man who plays that way… Has seen action at all five spots along the offensive line… Heavy, punishing hands deliver consistent blows… Confident player especially in pass protection… Keeps his feet moving at all times.

What’s Concerning: Doesn’t protect his flanks well in pass protection especially against speed guys… Tendency to stand up at the snap way too much… Lacks that traditional anchor you like to see in guards…

Our Draft Grade: This is a guy who did a damn good job against Aidan Hutchinson in the Orange Bowl. His versatility is likely to move up him a lot of boards but I wouldn’t be surprised to see him go in the mid-second to early third rounds. Playing in the SEC, he won’t be any stranger to big games.

Other Names to Keep an Eye On…