Karlos Williams Would Be Good Risk/Reward Signing for Steelers 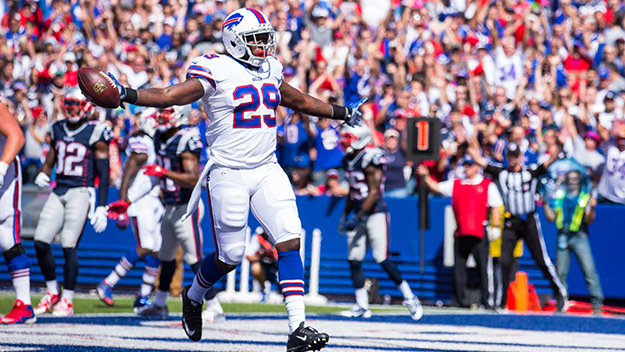 Source close to situation tells me Steelers continue to show interest in former Bills RB Karlos Williams. His brother Vince plays for them.

For those that aren’t familiar with Williams, here’s a quick recap of his career so far.

Williams was drafted in the 5th round by the Bills in the 2015 draft, and did have a past with domestic battery, where charges were never filed.

In his rookie season, Williams saw a lot of action due to injuries to starter LeSean McCoy and flourished. Williams would rush for 517 yards on 93 carries, averaging 5.6 yards per carry. He was especially skilled at finding the endzone, scoring 7 times on the ground and 2 times on receiving touchdowns.

After that though, Williams had a disastrous off-season in which he was suspended the first 4 games of 2016 for violating the NFL’s substance abuse policy, and then showed up to Bills camp grossly overweight.

In short, Williams is a young talented back, but he clearly makes some bad choices.

So why should the Steelers take a chance?

Well, first of all, Williams would come incredibly cheap. His contract was very small as a 5th round pick, and he still passed through waivers. Since then, he obviously hasn’t been in high demand. The Steelers could sign him to a contract that would be very easy for them to cut ties if he doesn’t straighten up. So on the risk side, there’s very little.

While the Steelers are currently really set at the running back position with possibly the best back in the game in Le’Veon Bell, and a capable veteran backup in DeAngelo Williams; things could get murky very quickly after 2016.

If the Steelers decide to let Bell walk, be it for off-field issues or simply because they can’t afford him, they’re going to need a starting running back. While I love DeAngelo Williams, I don’t see a 34 year old running back getting a new deal after this season, regardless of how well he might play in 2016.

Even if the Steelers decide to extend or franchise tag Bell in 2017, they’re going to need a capable backup; especially given his injury and suspension history. Either way you go, having a young guy like Karlos Williams on the roster really makes a lot of sense.

Now, I know that backing up one back with off-field issues with another one may not be ideal. However, the Vince Williams connection could be a positive for the young Karlos Williams.

Vince is definitely a big personality that’s caused some waves on social media in the past, but the Steelers love his intensity and work ethic. You don’t work your way from 6th round pick, to possible starting middle linebacker for the Steelers (maybe in 2017) without working your butt off.

That kind of influence in the locker room could really pay off for Karlos, who’s release by the Bills could be a wake-up call.

…or maybe not. Maybe the Steelers sign Williams and he just continues to stay fat and not take his NFL career seriously. If that happens, you move on, no harm done. The Steelers could sign Williams now and tell him they want to see him trim and fit by the time he’d be active after week 4… If he’s is great, if he isn’t then you cut him loose.