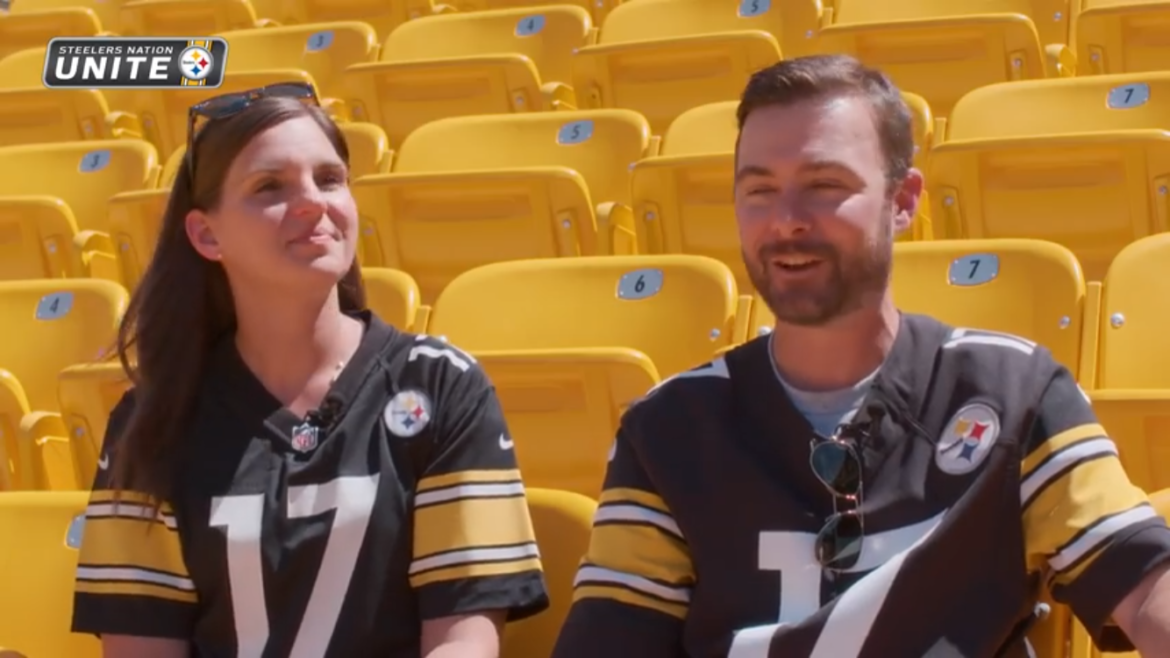 Six dedicated football fans were nominated as candidates to join the Ford Hall of Fans earlier this month. The winner will join an alumni of legends, filled with Pro Football Hall of Famers from players to coaches to GM’s, as they become enshrined themselves in Canton, Ohio. Besides that, three of the candidates will also receive tickets to Super Bowl LIII in Atlanta.

The Pittsburgh Steelers’ candidate is none-other than Rick Holman. A native of Pennsylvania, he has been a Steeler fan all of his life, literally dedicating his possessions and a large part of his time on this earth to cheer on his team. Nothing gets in Ricks way, not even pneumonia.

The aim of Ford Hall of Fans is to glorify the dedication and passion of the biggest fans across the league. This being something that Rick personifies, which even Terry Bradshaw himself admires. But we’ll get to that later on.

For now, let’s travel back 39 years to Super Bowl XIV. It was exactly then that Rick’s life as a Steeler fan truly began. Sat in his living room surrounded by his family, you can spot little one-year old Rick repping #12 as the Steelers clinched their fourth Super Bowl ring in a decade. When I asked him what football and the Steelers meant to him, he said: “it’s been my entire life.” 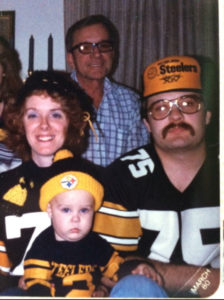 Fast-forward twenty years. Rick is now in his last year of education at Geneva College in Beaver Falls PA, in the summer of 2001. The Steelers have recently relocated to Heinz Field, but he hasn’t got a season ticket yet. So what does he do? He sells everything, literally EVERYTHING in order to scrape together a big enough purse to grab himself a season ticket.

After he found a suitable seller with two tickets, this is exactly what occurred: “The lady told me she MAY sell the license, so I went all in and sold my car, clothes, shoes, anything that I could to scrape together the money. ” He actually gave up his possessions just for the chance to be a regular at Heinz Field and from there his dedication has spiraled immensely. Not only has Holman never missed a game in the regular or postseason at Heinz Field in 18 long years, but he has also never missed a preseason game either. As well as his notable achievements, he’s been to all three Super Bowls involving the Pittsburgh Steelers since ‘01.

“That Time I Had Pneumonia”

Most people who encounter pneumonia tend to stay indoors, tucked up in cozy clothes and prepare to rebound from a truly awful illness. But for Rick Holman, that’s far too easy.

In our conversation, Rick recounted to me the time he suffered from pneumonia and discussed his battle to attend Heinz Field despite the enormous odds.

“I had pneumonia pretty bad last year, for the last home game of the season. So I went to get checked out at the Medical Center the day before the game. As I’m laying there in a hospital bed waiting on the doctor after a chest x-ray and some tests, they came back in the room and said “your right lung is pretty bad, so stay indoors and take it easy and take these medications.”” In spite of the unfavorable verdict, Rick explained he would attend regardless.

“They told me that if I had to be outside for anything, it shouldn’t be any longer than 20 minutes and I must have my face covered because of the freezing air. Well, I woke up the next morning and it was -7 and even colder with the wind chill. I got dressed and drove to the stadium against their orders of course!”

It was that day that the birth of Rick’s superstar status began, he explained.

“I was called that week by Steeler Nation Unite representatives to go down to the field for pre-game because I “checked in” to all of the games for the year and that’s when I told them, “It’s not just this year, it’s every game EVER played here.” They immediately interviewed me because they couldn’t believe it and especially because I was so sick that week. That’s where this whole story started. The Steelers aired an interview with me about selling all of my possessions for the ticket license and that is how Ford found me for this contest. I had no idea about it, they contacted me.”

In another incredible scenario, Rick did the unthinkable. Most of us remember watching Terry Bradshaw on the television. But Rick? He had him come to his house, play ball and sign some autographs. Here’s the most incredible Steelers story you’ll have ever heard.

“I was so completely blown away at Terry’s knock that I lost my composure. Never in a million years would I have believed that perhaps the greatest Steeler to ever live was standing in MY HOUSE. I was in complete shock.” It was later revealed in our conversation, that Fox had set the whole thing up as part of the Ford Hall of Fans.

“Ford planned this all along and I just couldn’t figure out why they had so many cameras in my house and outside. There were a dozen people here from Fox Sports and Ford. Thus, I couldn’t understand why they would make such a big deal just for me. Once I opened that door, I immediately knew why they were so secretive the whole time. What you see in the video is my real reaction! They then told us to “do it over” for another shot, but I just kept saying “I can’t”…I had tears running down my face, haha!” It’s no wonder that Holman couldn’t hold back the tears, this was his all-time hero literally in the midst of his own home.

Rick was blown away by how genuine Bradshaw was despite his status. “Terry was absolutely the most genuine, nicest, funniest guy I’ve ever met. I’ve watched him on TV for my entire life and what you see is what you get. He was so incredible and down to earth that it seemed like we’ve known each other forever.”

“We joked about playing football and his teammates, laughing about drinking Iron City beer as we were looking through my collection of Steelers memorabilia. I asked him which Super Bowl was his favorite and he immediately said “Super Bowl IX!” I asked why: he said “Because it was my FIRST.” I told him that if there was one that I could go back in time to see, that it would be Super Bowl XIII vs. Dallas. He said, “Wow, that was a good one…back and forth, great game!” Of course, he was the MVP. He then signed all 4 of my original Super Bowl ticket stubs from the 70’s. We then went outside and threw a football that he brought for about 15 minutes.”

“He also brought me a jersey and signed it on my back. It was honestly one of the best days of my entire life, I just wish that I knew he was coming so I could have got a picture with my kids.“

For many, Terry epitomizes everything that the Steelers represent. An honorable person, who’s grit and determination enhanced his likability in the city, whilst producing successful results on the field too.

A Lifetime Of Memories

Rick’s been to three Super Bowls. He’s witnessed 18 years of history at beautiful Heinz Field. He’s seen the greatest franchise of all time develop on that very same pitch, so what’s his favourite memory of Steelers football?

“My greatest memory as a Steeler fan has to be going to Super Bowl XL in Detroit with my dad and then to Super Bowl XLIII in Tampa with my wife and 2 friends. There have been so many great (and horrible) memories from Heinz Field. However, I would have to say that the Troy Polamalu interception in the 2008 AFC Championship Game is my favorite memory.”

That said, the Steelers have somewhat distanced themselves from the successes of yesteryear in recent history. Yet, Rick’s still optimistic about the future of the franchise, despite the possible loss of Antonio Brown and LeVeon Bell.

“Entering 2019, I feel that my Steelers are not too far off from returning to the Super Bowl. Even if they are without AB and LeVeon. I feel that those two positions can be filled and if they solidify the holes at inside linebacker and corner, the defense would improve tremendously.”

He added: “Perhaps all of the non-football distractions got the best of them this year, but it’s hard to tell. The losses to below-average teams last year was the deal-breaker. The talent’s there, we just need the Steelers to work together as a TEAM, on the field and off. The bottom line is…we want them to win. We as Steelers fans do not want to be wrapped-up in individual issues, we just root for the logo and want them to be successful.”

What Ford HOF Means To Rick

To be elected into the Ford Hall of Fans would be truly life-changing. Rick knows that, that’s for sure. In our conversations, he emphasized that it’d be the pinnacle of anything that he could have ever imagined as a football fan.

He exclaimed: “Canton would mean EVERYTHING to me. Yes, I would love the Super Bowl trip, but the Pro Football HOF would mean so much more. I would forever be associated with the NFL, right there alongside the greatest legends to ever live. It would be absolutely life-changing.”

It’s here that our chat ended, but I concluded the discussion having learned so much. I sensed the passion in his messages, and his dedication was clear as day. Rick Holman isn’t your ordinary super fan. He doesn’t wear extravagant outfits, nor does he promote himself to be something he’s not. He, just like Bradshaw, is one of us. A down to earth guy who loves his Steelers just as much as life itself. That love is truly unquestionable. Irrespective of the result, Rick will always be a Hall of Famer in the city of Pittsburgh. But let’s get him to Canton!

You can help Rick on his journey to enshrinement via the Ford Hall of Fans website which is linked below. 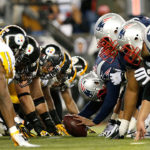 This is just plain cool.
When super bowl 8 was played versus Dallas, I bet a local millionaire in a small Oregon town $100. I took Pittsburg. I was only 23 anf that was a windfall. Thanks Steelers. A forever fan. John Bennett. Albuquerque NM.