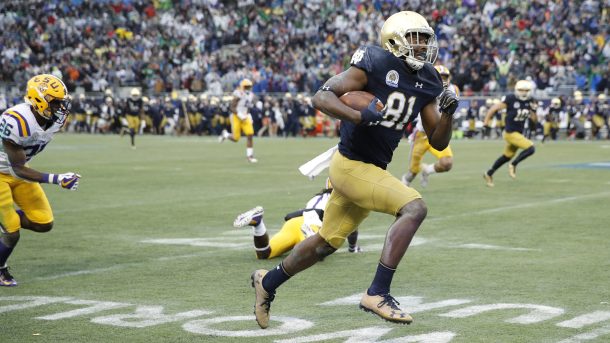 With the departure of Antonio Brown, the Pittsburgh Steelers are in need of a wide receiver to complement young star, JuJu Smith Schuster. Today we take a look at Notre Dame wide out, Miles Boykin to see if he would be a good fit in Pittsburgh.

Boykin has a size-weight-speed combination that is very rare. He’s 6’4, 220, ran a 4.42 40 yard dash at the combine, and had a 43.5 inch vertical jump. Boykin is a very willing blocker and doesn’t hesitate to push guys around. While he’s not a spectacular route runner, he’s very solid in that area, and with more refinement he can be a really good route runner for his size. He’s got great length, and he uses it well and consistently high point’s balls. One thing I noticed on film is that he does a really good job of finding soft spots in zone coverage. Throughout his tape are plays where he works back to the quarterback and finds spots in zone coverage between two defenders. Boykin generally has really solid hands and makes some nice catches.

I’d like to see Boykin be a little stronger at times when he plays. There are a couple plays where he allows some passes to be broken up that he probably should catch. He needs to improve his releases vs press coverage, and given his size and speed, if he can learn to consistently separate off the line he’ll be really tough to guard. Boykin’s game overall could use some refinement, and he can use his physicality more consistently than he currently does.

I’m a fan of Boykin. The Steelers have a good history of developing wide receivers, and Boykin has the physical tools to be a match-up nightmare on the outside. At the very least he’s a very nice outside complement to JuJu with the upside of a #1 receiver. He’d be a very solid pick, especially if they could get him with one of their two third round picks, and I imagine the Steelers will like him given his physical skill-set and willingness as a blocker.

Round Grade: Mid Second Round
Projected Round: Day 2

Eli you flat glossed over the one big concern that very Steeler fan should know: He takes time to get going. I mean why is it every year that Steeler Fans always ignore the negatives of a player just so they can jump up and down for the players positives? I mean I read the reports on guys like Boykin, Isabella, Paris Campbell and I come away with this conclusion: Have Steeler Fans lost there mind.