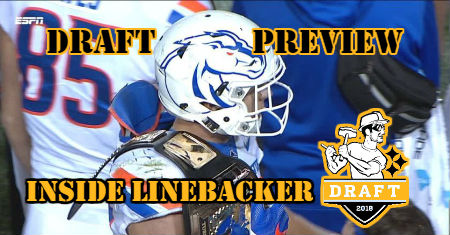 With less than a week remaining until the NFL Draft, we are wrapping up our position-by-position look at the Steelers roster and where the team has the biggest needs. Despite winning the AFC North Crown and finishing an over-ruled catch (that is now a catch) away from being the #1 seed in the AFC, the Steelers have plenty of needs to address on their current roster. While some believe the Steelers need to focus exclusively on defense in the upcoming Draft, the team has generally split their draft picks between offense and defense. The Steelers will have 7 picks in the draft with no picks in the 4th or 6th round but with 2 picks in the 5th and 7th rounds. Today’s preview will cover the inside linebackers, which is arguably the position of biggest need for this team.

Ryan Shazier’s 5th year contract option is guaranteed for injury so he will be a part of the 2018 Pittsburgh Steelers, though will likely spend the entire season on injured reserve as he continues to progress back from injury. Vince Williams is entering the last year of his contract. After Shazier’s injury last season, the Steelers were playing Vince Williams and Sean Spence on first and second downs then taking both off in favor of LJ Fort and William Gay on third downs or long-yardage situations. Without Shazier, the Steelers lacked an every-down inside linebacker and did not have a player capable of matching up with opposing backs and tight ends. Shazier was also the only player on the defense that consistently made splash plays and generated turnovers. The Steelers need an athletic sideline-to-sideline “Mack” linebacker to fill in Shazier’s spot in the middle of the defense. The Steelers did bring in Jon Bostic in free agency as a temporary stopgap, but there are concerns about his abilities in coverage and whether or not he can be a 3-down player.

Inside Linebacker is the position of biggest need and it would not be surprising if the Steelers took more than one during the 2018 Draft. The Steelers have done significant scouting work on the top ILB prospects, including the “Big Four” who will all likely be first round picks. In addition, the Steelers have scouted players who are likely Day 2 picks along with players that will be available late on Day 3. In the past, the Steelers have employed a strategy of drafting multiple players at positions of dire need. They doubled up at CB last year (Cam Sutton and Brian Allen), in 2015 at OLB (Bud Dupree and Anthony Chickillo) and CB (Senquez Golson and Doran Grant), in 2014 at ILB (Ryan Shazier and Jordan Zumwalt), 2013 at WR (Markus Wheaton and Justin Brown), and in 2012 at OT (Mike Adams and Kelvin Beachum). In total, this is 6 times in the last 5 drafts that the Steelers have double-dipped at a certain position. Given their pre-draft visits and scouting efforts, it appears a double-dip at inside linebacker could happen this season.

Potential Prospects: The “Big Four” inside linebackers that will likely go in the first round can be split into two sub-tiers. The top pairing of Georgia’s Roquan Smith and Virginia Tech’s Tremaine Edmunds may both go in the Top 10 and will certainly be off the board in the Top 15. After that, Boise State’s Leighton Vander Esch (READ: SCB Prospect Profile) and Alabama’s Rashaan Evans are considered late first round talents. The worst case scenario for the Steelers would be if all four players are off the board by the time our pick rolls around at 28th overall. The Steelers have also spent time with Texas’ Malik Jefferson (READ: Pre-Draft Visit Summary), a likely second round pick.

The Steelers also brought in two players from the Palmetto State, Clemson’s Dorian O’Daniel and South Carolina State’s Darius Leonard. O’Daniel (READ: Visit Summary) is a slightly undersized linebacker who was a tackling machine at Clemson. He played as a 4-3 strongside OLB in the Tigers defense and displayed some ability to cover tight ends and is a strong tackler. Leonard (READ: SCB Prospect Profile) is also a bit undersized and will need to add some functional strength to his game. He can be slow to diagnose at times and let the play come to him rather than attacking downhill. He has the frame to add bulk and the athleticism to cover in space. Both O’Daniel and Leonard are likely late Day 2 or early Day 3 picks. Ohio State’s Jerome Baker, whom the Steelers met with at the Combine and Pro Day, could also fall into this category of a slightly undersized but athletic linebacker. Baker seems to be the next in a line of athletic Ohio State linebackers who is rangy in coverage but can over-run plays and isn’t the best tackler.

In the later rounds of the Draft, if the Steelers opt to double-dip at the position, the names to watch are Maryland’s Jermaine Carter, Western Kentucky’s Joel Iyiebuniwe, Florida State’s Matthew Thomas. Carter (READ: Visit Summary) is a late-round prospect who anchored the middle of Maryland’s defense. He was a monster on special teams and made up for his lack of size with a high football IQ and being able to quickly diagnose and attack. Being undersized did hurt him in the tackling department as he missed a number of tackles and could get run over by bigger backs. Iyiebuniwe (READ: Visit Summary) is another athletic linebacker who put up monster numbers in college. He has the athleticism to run in coverage but lacks the physicality to be strong at the point of attack against the run. He has been described as “a linebacker in a safety’s body.”

Finally, one of the more intriguing late-round prospects is Florida State’s Matthew Thomas (READ: Visit Summary). Thomas has the highest SPARQ (athleticism metric) of any off-ball linebacker prospect (higher even than Leighton Vander Esch). After some struggles early in his collegiate career, including being suspended for 6 violating team rules then missing a year after being academically ineligible after his grades slipped in the wake of his mother’s death, Thomas finished strong. He led the Seminoles in tackles in both his junior and senior seasons and had a monster Orange Bowl against Michigan where he posted 11 tackles (3.5 TFLs). He is an explosive athlete with elite numbers in the broad jump, vertical jump, and a solid 3-cone drill and 40-yard dash. Thomas has the range to go side-to-side and cover down the field, but like many of the late-round linebacker prospects, is slightly undersized and will need to add some functional play strength and develop his instincts when attacking downhill. If the Steelers look to double-dip at the inside linebacker position, it would make sense to target Vander Esch, Evans, Jefferson, O’Daniel, Leonard, or Baker in the first two days of the draft then try to add Iyiebuniwe, Carter, or Thomas on Day Three. 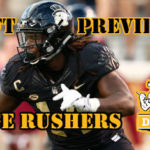 […] 70 – EDGE and ILB) and positional draft previews, the Steelers have the heaviest needs at inside linebacker, safety, running back, and cornerback. They have spent some time on depth defensive linemen and […]

[…] project what exactly the Steelers will do with their first round pick. The biggest needs are at at inside linebacker, safety, running back, and cornerback. They have spent some time on depth defensive linemen and […]